Stay tuned for updates to the summer series of camps offered in 2015. The 2015 Week-long summer camps are Limited to 20 Students in each camp. Learn more about the upcoming A-STEM for Life Programs offered for Summer 2015 for Middle School Students, entering 6-9 grade in Fall 2014 (age group expanded to include new high school students). According to educational statistics prepared for the Congressional Research Service (CRS) report, “There is growing concern that the United States is not preparing a sufficient number of students, teachers, and practitioners in the areas of science, technology, engineering, and mathematics (STEM). A large majority of secondary school students fail to reach proficiency in math and science, and many are taught by teachers lacking adequate subject matter knowledge.”

“When compared to other nations, the math and science achievement of U.S. pupils and the rate of STEM degree attainment appear inconsistent with a nation considered the world leader in scientific innovation. In a recent international assessment of 15-year-old students, the U.S. ranked 28th in math literacy and 24th in science literacy. Moreover, the U.S. ranks 20th among all nations in the proportion of 24-year-olds who earn degrees in natural science or engineering.” (Science, Technology, Engineering, and Mathematics (STEM) Education: Background, Federal Policy, and Legislative Action; March 21, 2008)

Leaders in STEM fields have recently called for major initiatives to be undertaken nationally to address these educational shortcomings. The high-tech industries have undertaken trends unanticipated 10 to 20 years ago: the outsourcing of mainstream engineering and computing jobs, with less reliance on US-born PhD graduates, a mandate for engineering and technological fluency, and the need to retrain college students in order to successfully change careers multiple times. 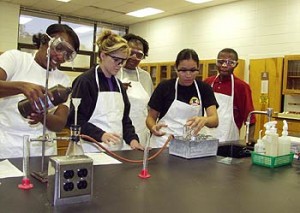 It is imperative that universities and organizations such as STEMPLOY respond proactively to the needs for education in STEM and STEM-influenced camps and outreach programs. We recognize that there are many STEM initiatives taking place in the college setting, however in order to attract more students to select STEM careers, we need to impact their choices and career decisions at a younger age. STEM career centered learning geared towards the middle and high school age students needs to be implemented to engage interest from students beginning with STEM relevance and impact on their communities. Key players involve MS and HS teachers, the current community of people such as parents, industry members, and academia in addition to the government sector (State and Federal) that can have an impact on regional, state and national policy. STEMPLOY offers a series of summer camps and educational programs for middle school students, called A-STEM for Life.