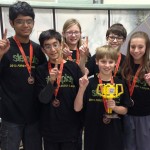 Hosted by Fairmont State University College of Science and Technology, more than 50 teams of middle school students from across the state participated for the largest science, technology, engineering and mathematics competition in West Virginia.

STEMPLOY’s students, all from Suncrest Middle School and ranging from grades 6-8, called their team the STEMTISTS: Taking Science to the Next Level.

“STEMPLOY is excited to have our team recognized for their hard work and efforts at FLL,” said Dr. Lynn Dombrowski, CEO of STEMPLOY, “The Morgantown Area Robotics (MARS) team was instrumental in helping our rookie team.” 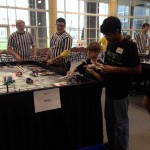 FIRST LEGO League is part of the FIRST (For Inspiration and Recognition of Science and Technology) organization.  FIRST is a dynamic, international, nonprofit organization, whose mission is to inspire our future workforce to appreciate the excitement and personal rewards of a career in science and technology.  FIRST® LEGO® League (FLL) is an international robotics program in partnership with LEGO in which teams of middle-school-aged students assemble and compete with their robots designed to accomplish tasks involved in a “real world” scenario. Using LEGO brick, and other elements such as sensors, motors, and gears, teams gain hands-on experience in engineering and computer programming principles as they construct and program their unique robot inventions.  Students learn how to brainstorm ideas, manage time better, work in teams, and learn how science can be used to solve real world problems.